Fish and seafood are considered valuable food products in the worldwide market. The specificity of different products in different regions of the world creates a large import market. Crabmeat is one especially valuable seafood product and the processing of it removes characteristics that can help in visual determination of a specific species. Varieties vary in market value and adding cheaper crab meat to a more expensive variety constitutes adulteration. In general, fresh caught fish have a higher nutritional value than farm bred fish, making fresh varieties more valuable. There are strict regulations for origin of seafood and misrepresentation of origin is a form of adulteration. Repeated frozen-thawed cycles of imported fish will reduce the nutritional value but this cannot be visually detected. There is a need for fast, non-invasive testing of seafood products for fraud and adulteration. NIR spectroscopy has been examined for this purpose and the results of some studies are documented below.

Detection and Quantification of Species Authenticity and Adulteration in Crabmeat Using Visible and Near-Infrared Spectroscopy – Gayo, Hale – Journal of Agricultural and Food Chemistry, 2007, 55, 585-592

Crabmeat is an especially expensive variety of meat and seafood, making it a prime target for adulteration. Processing of crab meat often removes morphological properties that allow the consumer to distinguish one variety from the other. A need exists for a fast, non-invasive methods to authenticate crab meat and NIR spectroscopy was examined for this purpose. Two different species (Atlantic Blue and Blue Swimmer) of crabmeat were used in the study. Atlantic Blue was the authentic species and Blue Swimmer was the adulterant due to its year-round availability, reduced cost, and import status. One hundred and ten samples of both the two pure species and mixtures ranging from 10% to 90% Blue Swimmer were homogenized using a blender. Ten absorbance spectra of each set were collected from 400 nm to 2498 nm at 2 nm intervals with an average of thirty-two scans per spectrum. Various pretreatment methods were performed on the collected spectra.

The one hundred and ten samples were split evenly into a calibration and validation set. Classification analysis was performed and the data plot showed a clear pattern as the amount of adulteration increased in the samples. Quantitative analysis using a calibration model for measuring the percent adulterant was able to accurate predict the test set within 6% error. The results prove the ability to use NIR spectra and a calibration model to determine adulteration in crabmeat.

Use of Near-Infrared Spectroscopy for Fast Fraud Detection in Seafood: Application to the Authentication of Wild European Sea Bass – Ottavian, Facco, Fasolato, et al., Journal of Agricultural and Food Chemistry, 2012, 60, 639-648

Origin of seafood is strictly regulated by laws in the European Union. Mandatory information is required for species membership, geographic origin, and whether the product is farm or wild. It is understood that fresh caught fish will have higher nutritional value than farm bred fish and while there are different characteristics that indicate this to be the case, it is accepted that there is a marked difference in fatty acid (FA) content. Analyzing FA profiles is one way to determine the difference between fresh caught and farm bred fish, but such tests are expensive, time-consuming, and ill-suited for large scale QA tests. NIR spectroscopy was examined as a method for authentication wild European sea bass. Farmed and wild sea bass were collected from different distribution centers and different cities. A total of thirty-eight calibration samples with a determined (proven to be 100% accurate) attribution of production method and sixty-six validation samples with declared (not proven) methods of production (thirty-two declared wild and thirty-four declared farmed). Thirty-five chemical properties and morphometric traits were measured for each sample. NIR absorbance spectra were collected in reflectance mode from 1100 nm to 2500 nm. Thirty-two scans were collected per spectrum and averaged.

Three different chemometrics techniques were used to process the spectral data. Two used pure discrimination analysis and the third used a regression model based on the fat, moisture, and δ13C and subsequent discrimination analysis. All three methods showed comparable results to the chemical analysis techniques currently used to discriminate between wild and farmed sea bass. The validity of the analysis was confirmed by the statistics for the chemometric analysis, which showed that the most predictive spectral regions for classification were related to wavelength absorbing areas for fat, fatty acids, and water content.

Repeated frozen-thawed cycles during the transport of frozen fish will result in quality changes that cannot be visually detected. Detection of reduced nutritional value from multiple frozen-thawed cycles requires expensive and time-consuming analysis of various quality parameters. NIR spectroscopy was examined as a method for detecting multiple frozen-thawed cycles in tilapia fillers. Sixty fillets from thirty tilapia fish were frozen at -18oC for twelve hours and thawed at 4oC for another twelve hours. This process is known as a frozen-thawed cycle. Fillets were then divided into six equal groups and each group went through the cycle again ranging from two to seven times. Tests were done for thawing loss, cooking loss, moisture, total volatile basic nitrogen (TVB-N), and texture analysis. NIR reflectance spectra were collected from 10000 cm-1 to 4000 cm-1 with 4 cm-1 resolution and thirty-two averaged scans per spectrum. Three spectra were collected for each sample and averaged into one spectrum. This process was done for both the dorsal and belly portion of each fillet. Every sample was scanned in this way for both the frozen and thawed state for all frozen-thawed cycles from one to seven. 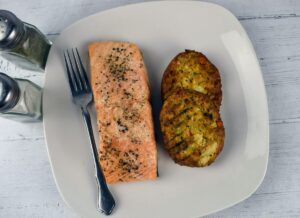 As expected, the reference testing showed moisture loss, protein degradation, and destruction of texture after the samples went through repeated frozen-thawed cycles. Visual examination of the spectral data of the reflectance spectra shows a clear distinction between the once frozen-thawed samples and those that went through the cycle multiple times. Various pretreatments were applied to the data and four separate qualitative models using Mahalanobis distance discrimination analysis for Thawed Dorsal (TD), Thawed Belly (TB), Frozen Dorsal (FD), and Frozen Belly (FB) were created. Validation set spectra for the FD samples showed the best results with the ability to detect repeated frozen-thawed cycle samples with an accuracy of 93.33%, proving the feasibility of using NIR spectra to classify single and multiple frozen-thawed cycle samples of tilapia fillets.