Rice is an edible starchy grain and the grass plant from which is it produced.  Approximately one-half of the world population is wholly dependent on rice as a staple food, including all of East and Southeast Asia.  It is the third highest produced agricultural commodity in the world at 741.5 million metric tons in 2014 after sugarcane (1.9 billion metric tons) and maize (1.0 billion metric tons).  95% of the world’s rice crop is consumed by humans, making it by far the most widely consumed food in the world by people as sugarcane, maize, and other grains have sizable portions used for purposes other than human consumption.  It is estimated that more than one-fifth of calories consumed by humans worldwide come from rice.  More than 90% of rice is grown in Asia, principally in China, India, Indonesia, and Bangladesh.  Many cultures have evidence of rice cultivation with the earliest archaeological evidence coming from central and eastern China dating back to 7000 BC to 5000 BC.  Rice is cooked by either boiling or steaming. It can also be ground into flour. It can be eaten alone and is often used in a great variety of soups, side dishes, and main dishes in numerous types of cuisines, especially Asian and Middle Eastern.  Rice varieties are classified as long, medium, and short grained.  Long-grain rice grains tend to remain intact after cooking while medium-grain rice becomes sticky.  Medium-grain rice is often used in sweet dishes while short-grain rice is used extensively in Japan, especially for sushi and to accompany savory dishes.  Because rice is such a widely consumed food, nutrition content is analyzed extensively to find ways to fortify it to reduce malnutrition.   A 2018 World Health Organization guideline based on clinical research showed that different micronutrient strategies to fortify the nutritional content of rice such as iron only, iron with zinc, Vitamin A, and folic acid, or iron with other B-complex vitamins can reduce the risk of iron deficiency by 35% and increase levels of hemoglobin. 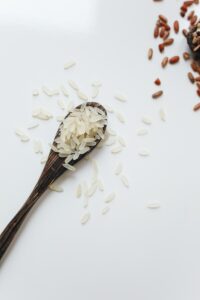 The cultivated rice plant is normally an annual grass that grows to about four feet in height.  It is typically grown on submerged land in the coastal plains, tidal deltas, and river basins of tropical, semi-tropical, and temperate regions.  In some tropical areas, it can survive as a perennial and produce a ratoon crop for up to thirty years.  Rice seeds are sown in prepared beds and transplanted to a paddy (field enclosed by levees and submerged by two to four inches of water).  Adequate irrigation, good soil quality, and long periods of sunshine are essential for good rice growth. Yield from rice paddies can vary considerably, ranging from 700 kilograms to 4000 kilograms per acre.  The average time for plant maturation is around one hundred twenty days.  The grain appears in long panicles on top of the plant.  Harvesting typically occurs when the moisture content is around 25% and can be done manually or mechanically.  Mechanical harvesting involving cutting the crop with hand tools and while effective, it is very labor intensive. This method is common in Asia. Mechanical harvesting is more predominant when machinery is available and requires threshing to separate the grain from the stalk and cleaning.

After harvesting, the rice plants are transported to a mill for processing. The first step in processing rice is pre-cleaning which consists of two procedures, cleaning and de-stoning.  A paddy cleaner is used to separate impurities like dust, straw, sand, clay, and heavy particles from paddy.  After impurities are removed, the dehusking process begins.  Rice dehusking is the process of removing the husk and bran from paddy rice and producing head white rice grains that are free from impurities and contain a minimum number of broken grains.  The husk is the enclosure of the harvested rice kernel.  The bran is the hard outer layer of rice and other cereal grains.  The husk is removed first by a rice separator.  Rice that is processed to only remove the husks is known as brown rice and has a much higher nutritional value than white rice.  It is known as a source of thiamine, niacin, riboflavin, iron, and calcium.  Further milling by rubbing the grains together under pressure to remove the bran makes white rice.  The process is still done by hand in many parts of Asia but large mills operate in Japan and other areas.  Traditional methods done by manual labor use pestle and mortar worked by hand, foot, or water power.  This process is also known as polishing and can include polishing kernels of rice to change their appearance, taste, and texture.  White rice is typically enriched with vitamins to replace some of the nutrients lost during dehusking.  Proper packaging and shipping of finished rice is essential because of the worldwide distribution of the product. 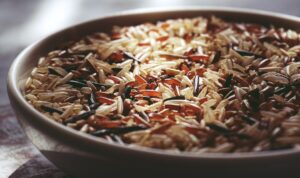 Trangenic rice are rice strains that have been genetically modified and they have become a very important segment of the rice market.  Rice plants have been modified to increase micronutrients, accelerate photosynthesis, tolerate herbicides, resist pests, increase grain size, generate nutrients and flavors, and produce human proteins.  While the benefits are pronounced, transgenic rice has also created legal issues and regulatory concerns.  The cultivation and use of genetically modified rice varieties is controversial and not approved for commercial use in some countries.  Concerns include ethics, environmental impact, food safety, product labeling, international food requirements, intellectual property, and role in industrial agriculture.  In 1988, the first transgenic rice plants were developed by electroporation-mediated or polyethylene glycol-mediated protoplast transformation methods.  The fertility recovery of transgenic rice was reported over the next few years. In 1991, the direct DNA delivery system known as biolistic transformation method was successfully used to generate transgenic rice plants.  While successful, this method does present the risk of an unstable and aberrant expression of the gene because of its likely fragmentation from this technology.  The Agrobacterium strategy was developed and generates transgenic plants with a more predictable pattern of integration and a non-rearranged segment of DNA being inserted into the genome. 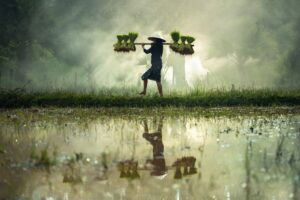 In 2000, the first two transgenic rice varieties (LLRice60 and LLRice62) were approved for research in the United States. Both show herbicide resistance. Subsequent approval of these and similar strains occurred in Canada, Australia, Mexico, and Colombia but none of these approvals triggered commercialization. Over time, individual countries have developed their own regulatory systems regarding transgenic plants, with marked differences between the United States and Europe.  There have been incidents of import suspension to certain countries from genetically modified product contamination, often having a detrimental effect on growers and the market.   Research to develop Golden Rice began in the late 1990s.  Golden Rice is a transgenic variety of rice produced to biosynthesize beta-carotene, a precursor of Vitamin A. The intention was to produce a fortified food for production and consumption in parts of the world with a dietary shortage of Vitamin A. The first research results were published in 2000 and golden rice was considered a breakthrough in biotechnology as the researchers had engineered an entire biosynthetic pathway.  The first field trials of golden rice cultivars were conducted by Louisiana State University in 2004.  Field test results have indicated that field-grown Golden Rice produces four to five times more beta-carotene than that grown in greenhouses.  In 2018, the health organizations in multiple countries including the United States, Australia, Canada, and New Zealand approved the use of Golden Rice for human consumption.  Research continues on different properties of transgenic rice, such as herbicide tolerance, insect, bacteria, fungus, and virus resistance, grain yield, and nutritional quality.  New advances and breakthroughs will bring on new challenges as well as controversies and it will become ever more important to develop new methods of testing and analysis to help future breakthroughs in genetic engineering. 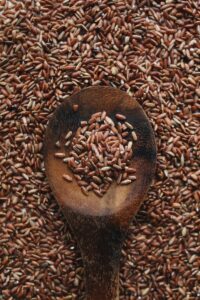 NIR spectroscopy has emerged as a tool for rapid, non-invasive, and cost-effective analysis of parameters of interest in rice that could potentially replace traditional reference methods. Starch is an essential component in rice and consists of two types of molecules: the linear and helical amylose and the branched amylopectin.  Typically, starch contains between 20% to 25% amylose and 75% to 80% amylopectin by weight depending on the plant. Studies have been conducted using NIR spectroscopy to measure amylose concentration in both rice and its flour product.  Protein is another important component in rice and has been successfully measured as well.  Proper moisture level in rice is very important during harvesting, storage, and transport.  NIR spectroscopy is well-suited to for moisture analysis because NIR light is strongly absorbed by water. Other chemical and physical parameters of interest in rice that have been measured using NIR spectroscopy include breakdown and setback viscosity, antioxidant activity as total phenol content (TPC) and radical activity [both expressed gallic acid equivalent (GAE)], and gamma oryzanol, a compound with noted health benefits that is rich in brown rice.  Adulteration is a big problem in the food market and the amount of rice produced in the world and localized nature of growing in Asia compound the problem for rice.  Rice can vary greatly in nutritional content and market cost.  NIR spectroscopy has been used as a tool for authenticating higher quality and more expensive brands of rice.  Species classification is important, especially when discriminating between both hybrid rice and transgenic rice from normal varieties. NIR spectroscopy has been studied for this purpose as well.  One in-depth study for transgenic rice showed the ability to quantify wall polymer features that affect biomass saccharification. Weevil infestation must be prevented in rice and millers often use more pesticide than is necessary to ensure the elimination of all weevils, but this wastes product and creates potential health issues for the consumer. NIR spectroscopy has shown the potential to quantify weevil infestation in rice. Such analysis would enable millers to use the minimum amount of pesticide necessary to eliminate pests.  All of these parameters and measurements have been studied using NIR spectroscopy with results showing the potential to replace traditional reference methods.

From Disagreements To Dialogue: Unpacking The Golden Rice Debate

From disagreements to dialogue: unpacking the Golden Rice debate (nih.gov)