Honey is a pure and valuable product that does not allow for the addition of any other substance. It is more expensive than other sweeteners and is thus subject to adulteration with cheaper sweeteners like cane sugar, beet sugar, and high fructose corn syrup. Another form of honey adulteration is misrepresentation of origin. Harvest statistics of the expensive Manuka honey from New Zealand have shown that only 1,700 tons are harvested per year, yet global sales have been reported as high as 10,000 tons per year. This clearly indicates a large misrepresentation of cheaper honey as Manuka. Effective testing methods exist for honey purity but they are expensive and difficult to implement on a large scale. NIR spectroscopy has been examined as a method for detecting adulteration of honey and the results of some studies are summarized below.

Honey is a sweet and viscous product derived from honey bees and the nectar of flowers. By definition, it is a pure product that does not allow for the addition of any other substance. It is naturally sweet, can be consumed by humans without processing, and has significant nutritional and medicinal benefits. The price of honey is much higher than other sweeteners, such as cane sugar, beet sugar, and corn syrup. Because it is such a valuable product, honey is subject to adulteration with cheaper sweeteners. Studies have been conducted using analytical techniques like isotopic methods, chromatographic methods, thermal analysis, and nuclear magnetic resonance (NMR) to detect adulteration in honey. While effective, these tests can be time-consuming, expensive, destructive of the analyzed product, and are ill-suited for large scale analysis. NIR spectroscopy offers a fast and less expensive alternative to traditional methods and the feasibility of using NIR spectroscopy for detecting honey adulteration was examined in this study. Sixty-eight honey samples from six floral origins were procured for the study. Before NIR spectra were collected, the samples were incubated overnight, stirred to ensure a uniform mixture, and adjusted to a standard solids content of 70° Brix to avoid variance in the spectra from naturally occurring differences in sugar concentration. Fructose: glucose mixtures were dissolved in distilled water at the following ratios: 0.7:1, 1.2:1, and 2.3:1. A portion of twenty-five honey samples were chosen and each was adulterated with the mixtures at the following ratios: 7%, 14%, 21%, and 28% (w/w). In all, sixty-eight of these were chosen for NIR spectra collection to keep the number of pure and adulterated samples even, as an uneven number of samples when doing classification analysis can risk overfitting of the model. NIR spectra were collected from 10000 cm-1 to 4000 cm-1 at 3.856 cm-1 intervals. Thirty scans were collected per reading and averaged into one spectrum. This process was repeated in triplicate for every sample and the three resulting spectra were also averaged. Smoothing and standard normal variate (SNV) were applied as preprocessing methods before chemometric analysis. The Kennard-Stone algorithm was used to divide samples into a training set (ninety-four samples) and test set (forty-one samples). Both Wavelet Transformation (WT) and Principle Component Analysis (PCA) were used to compress the spectral data and as a means for variable selection. Five different classification algorithms were used to assess classifying the samples into pure and adulterated groups from the training set NIR spectra. The test set NIR spectra were then used to predict a group for those samples.

The five modeling algorithms used were Least Square Support Vector Machine (LS-SVM), Support Vector Machine (SVM), Back Propagation Artificial Neural Network (BP-ANN), Linear Discriminant Analysis (LDA), and K-Nearest Neighbors (KNN). LS-SVM correctly classified over 95% of the test set samples with the other four algorithms ranging from 82.9% to 90.2%. In order to verify that this model is suitable for use in a practical setting, further analysis is warranted to determine that the calibration is actually detecting the cheap sugar adulterant and not the addition of distilled water. Water is very absorbing of NIR light and even small changes result in a change in the water absorbing wavelength ranges. Examination of which wavelength ranges are being used for the calibration will determine if this is the case but such analysis was not presented in the paper. Careful analysis of wavelength ranges of interest as well as the inclusion of more samples from different origins will be necessary before using this model in a real setting.

Honey has been produced by bees since ancient times from flower nectar for its sweet taste, nutritional value, and health benefits. It is a rich source of sugar as well as organic acids, proteins, vitamins, enzymes, and biologically active compounds. The quality of honey is determined by its botanical and geographical origin. It is considered to be a pure product. The addition or removal of any other substance in honey is prohibited. Honey is expensive and thus subject to adulteration by cheaper sweeteners such as sugar, inverted beet syrup, maltose syrup, and high fructose corn syrup (HFCS). HFCS is a very common adulterant of honey because of its low price and similar chemical composition. Several techniques have been applied to detect and quantify HFCS in honey but they are time-consuming, expensive, destructive, and require the use of skilled labor, making them ill-suited for large-scale analysis. The feasibility of using NIR spectroscopy as a method for determining HFCS adulteration in honey was examined. Thirty-three pure multi-floral samples of honey were procured for the study. A mixture was prepared using all thirty-three pure samples to ensure homogeneity. Adulterated samples were prepared in duplicate at the following ratios: 10%, 20%, 30%, 40%, 50%, 60%, 70%, 80%, and 90% by weight. Both pure honey and pure HFCS were set aside for analysis as well. For model validation, five samples were prepared that were individual samples from the thirty-three samples and not part of the homogenized mixture at the following adulterant ratios: 0%, 5%, 15%, 25%, and 45%, all ratios that were not used for the training set with the exception of 0%. NIR spectra were collected from 400 nm to 2500 nm at 0.5 nm intervals. All samples were scanned twice and the two spectra were averaged into a single spectrum for each sample. The NIR spectra were smoothed before chemometric analysis. Linear Discriminant Analysis (LDA) was applied to create a classification model for separating pure honey and adulterated samples. A Partial Least Squares (PLS) regression model was created from the NIR spectra and reference values for % HFCS adulterant. Both models and the NIR spectra of the five samples created for the validation set were used to confirm the validity of the models. 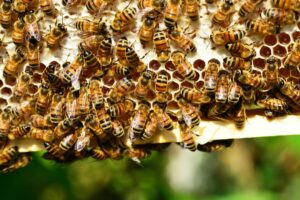 The results of this study were excellent and proved the feasibility of using NIR spectroscopy as a method for detecting and quantifying HFCS adulterant in honey. 100% correct classification was achieved using LDA. The PLS regression model showed high correlation and the RMSEP was slightly above 3%. Independent predictions all showed an error of less than 0.5% for samples at 15% adulterant or less and less than 1% error for the 25% adulterant. The prediction error was higher for the 45% adulterant but from a practical view, such a high adulteration level detection with more error would not be an issue in a real setting. The potential exists to replace traditional expensive and time-consuming methods for detecting honey adulteration with NIR spectroscopy. Future work could include adding more types of honey and adulterants to the model to increase the scope and robustness of this method.