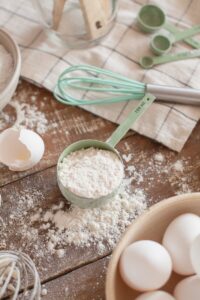 Flour is a powder that is made by grinding grain and is used to make an assortment of foods. It can also be made from roots, beans, nuts, or seeds.  Flour milling is grinding grains between stones or steel wheels.  The earliest evidence of flour milling dates back to 6000 BC.  The Romans were the first to grind seeds on cone mills and the first steam mill was built in London in 1779.  The industry was revolutionized in Hungary in the mid-nineteenth century with the advent of cylinder machines.  Modern advances in flour manufacturing includes improvements in milling and the addition of nutrients to flour, such as iron, niacin, thiamine, and riboflacin.  Wheat is the most common grain used to make flour. Other grains that can be used for flour production are rice, rye, barley, corn, millet, quinoa, buckwheat, and oats.  However, wheat flour is so prevalent that it is usually understood that “flour” alone refers to wheat flour, unless the flour in that region of the world is another type that is more common. For example, rye flour is popular in northern and eastern European countries where wheat does not grow well and rice flour is very popular in Asia.  Cereal flour and particularly wheat flour is the main ingredient in bread. By definition, cereal flour consists of the endosperm, germ, and bran together (known as whole grain flour) or of the endosperm alone (refined flour).  The two main components of flour are starches and proteins.  Starches typically make up about 70% of flour composition.  When flour is mixed with liquid, gluten protein is formed.  As a rule, the higher the protein content, the harder and stronger the flour is and such flours are used to make crusty or chewy breads. Likewise, lower protein flours are softer and better for baked goods. The “crumb” in flour-based foods refers to a network of starch and protein interspersed with millions of tiny air bubbles.  The higher the protein, the stronger the binding of the crumbs. There are different types of flour used in cooking, such as all-purpose flour, bread flour, and cake flour. These are classified based on protein content and binding strength. Cake flour is the lowest in gluten protein content at 6% to 7%, followed by pastry flour, all-purpose flour, bread flour, and hard flour at around 14% to 15% gluten protein content.  Refined flours are often bleached with a chemical whitening agent and such flours are referred to as white flour.  The practice of bleaching flour is illegal in the United Kingdom and European Union but occurs in many other parts of the world.  These flours can also be treated with a maturing agent which can either strengthen or weaken gluten development.  Some substances can act as both a bleaching agent and maturing agent, such as chlorine gas.  Chlorine gas weakens gluten development and oxidizes starches, making it easier for the flour to absorb water and swell.  Batters are thicker and result in a more desirable and softer formation for cakes, cookies, and biscuits.  Bleaching flour significantly reduces the nutrient content and nutrient fortification usually occurs in white flour.  Ash is defined as the mass that remains after a sample is incinerated in an oven according to different standards and in some parts of the world, this value is used as a labelling standard.  Ash is an easily verified indicator for the fraction of whole grain remains in flour because the mineral content of the starchy endosperm is lower than the outer parts of the grain.  All-grain flour is considered to have a milling yield of close to 100% while plain white flour typically has a milling yield in between 50% and 70%.   In the United States and the United Kingdom, the ash mass is rarely used as a standard, but protein content is required labelling and protein can also be used for comparing milling yield of different flours.  The development of gluten-free flour has become very important as a sizeable portion of the world’s population suffers from celiac disease, wheat allergies, and related ailments.  There are alternative flours such as corn, rice, buckwheat, and pea flours. It is important to avoid cross-contamination with gluten products during milling, storing, transport, and cooking.  Another potential alternative for gluten-free flour is flour milled from transgenic wheat that has been genetically modified to eliminate gluten. While such strains of wheat have been the subject of research, the practice remains controversial and no such strains have been approved for commercial use.  As flour continues to advance as a crucial part of the world’s food supply, it is important to develop new and sound testing methods to improve product quality and consumer safety.

The flour milling process begins with the arrival of the wheat at the mill, where it must be properly stored in silos and protected from weather, humidity, rodents, and insects.  Before storage, it is tested to ensure proper specification for things like variety, moisture content, specific weight, impurities, enzyme activity associated with sprouting, and protein content.  Wheat is thoroughly cleaned when it is taken out of silos.  Magnets are used to remove any metal objects, machines are used to remove barley, oats, and small seeds, and gravity separation is used to remove stones.  Throughout this process, air currents are used to remove dust and chaff.  After cleaning, the wheat is conditioned to a desirable moisture content by tempering it with water and storing it in bins.  This process softens the bran and enhances the release of the inner white endosperm during milling.  Many flour products are made from different blends of wheat and different wheat varieties can be blended in a process known as gristing. The finished flour can also be blended after milling.  The whole preparation process requires skilled millers who understand how to properly blend based on test data and the proper tempering time.  Inadequate tempering results in an increase in ash content due to poor separation of the bran from the kernel while too much tempering can result in clogging of equipment during milling and processing.

Milling is a succession of reductions in grain size which is achieved by passing the grain between cylinders and sieving to sort the particles.  The first part of the process is separating or breaking where the grist is passed through a series of break rolls rotating at different speeds.   The purpose is to separate the bran from the endosperm as efficiently as possible to produce clean intermediate products. In the reduction stage, particles go through a series of fine rollers and sieves through a machine called a plansifter. They contain vertically stacked sieves with meshes of various sizes, typically five or six.  Air separators help remove the bran particles that are similarly sized to the endosperm and from endosperm with small pieces of bran still attached. After reduction, each stream passes through cleaning machines known as purifiers.  Purifiers also contain a series of sieves that contain an upward current of air and further sift the product.  This process is repeated multiple times and is typically performed four to five times depending on the desired extraction rate.  In larger mills, the last two passages can split the grist into coarse and fine groups for better separation.  Final crushing is made by perfectly smooth rollers that reduce the final processed middlings (the coarse fragments of endosperm) into flour. Leftover grain material can be used in cereals or as animal feed.  If white flour is desired, bleaching occurs after the final crushing.  Because bleaching significantly reduces the nutrient content of white flour, thiamine, niacin, riboflavin, and iron are added after bleaching.  Finished flour is then either bagged for home and local market use or stored in preparation for bulk delivery. 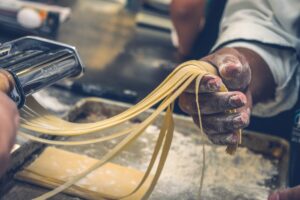 NIR spectroscopy has emerged as a tool for rapid, non-invasive, and cost-effective analysis of parameters of interest in flour that could potentially replace traditional reference methods.  There are a number of quality parameters in flour that have been studied and predicted with NIR spectroscopy.  Moisture, fat, protein, and physiological activity are all important parameters that have been studied. Moisture, fat, and protein are essential quality parameters that are measured in most foods while physiological activity can be used for breeding selection. Ash is an important indicator of the whole grain remains in endosperm and one study examined determining ash content in various wheat flours using NIR spectroscopy. Results were good enough for sample screening purposes.  Another study examined using both NIR and MIR spectroscopy for determining protein and ash in wheat flour. Better results and correlation were shown using the NIR spectrometer and were good enough for use as a quality control tool.  Starch is an essential quality parameter in flour and four separate starch parameters have been examined and proven to be able to be measured using NIR spectroscopy – amylose, resistant starch, digestible starch, and total starch.  Flours are often blended for flavoring, nutritional specifications, and optimization for the type of food product that will be made from them.  The blending of potato flour and wheat flour has become prominent in China and NIR spectroscopy was studied as a method for determining the potato flour content in potato and wheat flour blends, with results proving that the potato flour content in blends could be determined accurately and quickly.  Tubers are cultivated and consumed as an alternative food to rice and are usually processed into flour to prolong shelf-life.  Most are white in color but can vary greatly in nutritional value, making them subject to adulteration.  Excellent discrimination was obtained for three separate species of tuber flours with varying nutritional content.  Taro flour and oat flour are two types of flour considered to have higher market value due to flavor specificity, high nutritional content, and lower availability.  Both types have been studied using NIR spectroscopy to determine adulteration with other types of flour, with good results being shown for both discrimination from other types and in mixtures to determine a percentage of adulteration level.  All of these parameters and measurements have been studied using NIR spectroscopy with results showing the potential to replace traditional reference methods.

How Flour Is Made